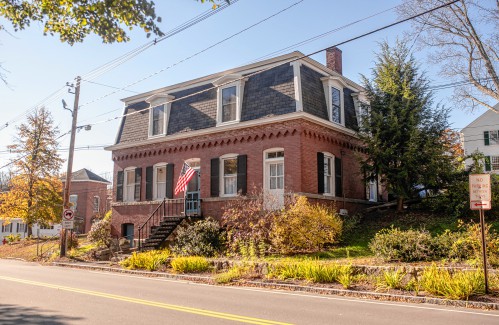 Geographically and economically, Greenville has been shaped by the textile industry. Marshall Buttrick, president of the Greenville Historical Society, explained that the Columbian Manufacturing Company, established as “Remsen” in 1826, produced textiles, mostly denim, in factories along the Souhegan River for nearly 100 years. The falls along the river were a perfect place to harness hydraulic power, used to drive mill machinery and later electricity.

In 1872, the Columbian Manufacturing Company office building was built in the center of town. Still there today and converted into a house, the large brick building sits on the corner between Main and Temple streets. Standing outside the house, which he bought and renovated in 2020, Ron Schaeffer pointed to the Souhegan River.

â€œMost of these brick buildings were linked to the [Columbian Manufacturing Company] mills, â€he said.

Buttrick said the Columbian Manufacturing Company is a huge employer in the area, with hundreds of people working in the factories. Most of the employees were women.

The office building is slightly upstream from the mills. Nearby is the Red Brick Inn, probably used as a guesthouse during the mill era, and across Main Street, next to the library of the same name is the Chamberlain House, owned by a family who successfully exploited grain and furniture. mill and sawmill down the river.

The two-story office building, located at 1 Temple Street, has a large star on one side. Walking around the building, admiring the original decorative brick outcrops below the roof line, Schaeffer said, â€œIt’s called dental work. ”

He added that many brick buildings (but not the office building) around the city would have been two or three stories taller at the start of the mill. Buttrick explained that the upper levels were removed for fear they would collapse.

Inside there is a wide staircase that goes up to the second level. The top floor of the office was once a large open room, â€œan auditorium space,â€ Schaeffer said, where events and gatherings were held.

â€œEveryone was working for the town factory at that time,â€ he explained, and the Columbian Manufacturing Company office building was a central meeting point for the community. The Independent Order of Odd Fellows and other “fraternal societies have reportedly held meetings there,” Buttrick confirmed.

Since then the floor has been transformed into smaller rooms and a kitchen area, which could be used as a separate apartment space.

The first floor of the building is sunny with high ceilings and some original exposed beams.

â€œI had to dig some of the fixtures into the plaster,â€ Schaeffer said.

This floor housed the offices, and the mill workers may have come here to collect their wages from the payer. The kitchen has new appliances and fresh paint, but maintains the feel of a historic space.

â€œThere is a photo of World War I soldiers lined up on the balcony just outside,â€ Schaeffer said.

Buttrick said the house likely continued to serve as an office building for factories into the 1950s, long after the Columbian Manufacturing Company owned it. In the early 1970s it was transformed into a doctor’s office, then eventually became a residence.

Schaeffer and his wife bought a number of historic homes in the area. They repair them and resell them, and in the process, Schaeffer said he enjoys learning the history of buildings and strives to preserve their historic features. Schaeffer said the house was in poor condition when he bought it. He repainted, redone some flooring, did all of his electrical and plumbing, and even added an imposing sink and mirror to the downstairs bedroom.

The basement is a small space with exposed stone walls and a huge safe. Inside the safe’s white brick walls is a walk-in space with shelves on either side. Buttrick theorized that it was probably used to store money and important documents.

The home at 1 Temple Street is in the heart of Greenville. It holds a rich history deeply tied to the city, and with further interior renovations it’s ready to be someone’s home.